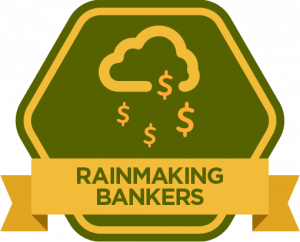 Half the damn world.

They are TRYING to survive.

Half The Office Laid Off

The Internet bubble had burst.

Goldman’s Silicon Valley office I’d relocated to was being slashed.

It didn’t make sense to me.

Is this as good as it gets?

All these people who’ve given their life to this business just trying to survive?

Wasn’t The Dream I Had

As a kid I dreamed to live the most amazing life I could imagine.

From before I can remember my Mum says I’d stamp my feet tantruming about doing what I want.

Why settle for living any other way?

We seemingly only get this one life, so why not go for what you truly want?

Years before Goldman Sachs had been the formula to my most amazing life.

But sitting there in 2001 it was clear that just showing up and working hard wasn’t even a formula to survive.

We’ve been running a program on LinkedIn that connects me to 50 senior Wall Streeters a day.

Surviving is a theme we keep hearing.

The fuller message of that headline read—”I’m simply trying to survive so I can retire at some point.”

That’s the dream of a Wall Street career?

Even with the economy on another decade-long credit binge many people, even on Wall Street, are struggling.

The hedge fund business has never been tougher.

Banking too has many rough spots.

Certainly on sinking ships like Deutsche Bank, many are scrambling to survive.

But even on flagships like Goldman, partners are being pushed overboard for failing to thrive.

Wall Street are some of the best jobs in the world.

Yet how many people find themselves stuck merely trying to survive?

And so long as our minds are stuck on surviving, we can never be thriving.

Living in fight or flight.

Playing off the back foot we never put our best foot forward.

Tentative, trying not to get it wrong, we don’t get it more right.

Merely trying to survive, how can we expect to thrive?

Are never focused on surviving.

Making it rain you’re only ever focused on thriving.

Here’s Track 2 on The Systems from the Rainmaking Bankers Masterclass: