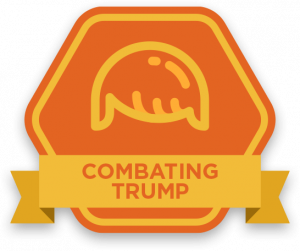 One of the saddest parts of the Trump presidency is how much misery he’s sparked.

Lefties like to think he won by inciting angry voters…

Yet ironically they are the ones left with all the anger.

How many people have made their lives worse because Trump is president?

Especially once you disconnect from the media cycle, and see the games for what they are…

It’s shocking “grown-ups” wake up every day filling their heads with misery worrying about something they can’t control.

They might feel right, yet they’re the ones left whining.

Focus On What You Can’t Control

Adults know that wasting your life worrying about what you can’t control is a miserable way to die.

Yet how many of us, addicted to the media cycle, guzzling Trump whine, have ruined the last few years of their life?

How many of them feel justified?

Well, he just sucks so much.

Did you see what he did?

Yeah, he took over the country and your life by getting you talking about him every day.

Some Cheese For Our Whine?

And anyone whining about the Trump problem only has one solution.

Do everything you can to change it.

Or, perhaps just anything…

One might say, you only get one vote, that’s all you can do…

Great, then why live hungover on Trump whine?

Or you could focus on what more, if any, all, of us could do to actually beat him.

Playing Into His Game

Trump won because he got everyone saying his name.

“Good publicity is preferable to bad, but from a bottom-line perspective, bad publicity is sometimes better than no publicity at all. Controversy, in short, sells,” Trump wrote in Art of The Deal.

Trump well gets negative attention can be as powerful as positive, and the more he’s whined about…

At this point of course he’s already won 2020, but anyone looking to change that, wants to play a smarter game.

Here’s 3mins on how he wins by consuming the world’s oxygen getting people talking about him:

And here’s 15mins, Chapter 5 from the Combating Trump Masterclass, on how he manipulates attention and how we combat it: