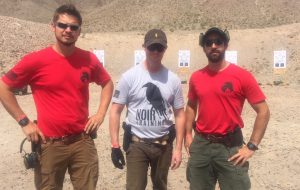 Some time ago I decided that if our society wasn’t going to control guns, then I would learn some gun control of my own.

Watching a video of Keanu Reeves shooting 3 gun for his role in John Wick, I thought to myself, that’s exactly how I want to shoot.

So I sought out trainers—two Navy SEALs—and every month or so I run around the desert training to shoot like John Wick.

Now, I won’t pretend that I’m doing this because I ever expect to be in a gunfight—I do this because for nearly two decades I’ve sought out transformational experiences through learning fun skills.

If you think shooting is bad or immoral or wrong for whatever reason, I understand this stuff isn’t for everyone, even if every night we “entertain” ourselves with murder, and playing with toy guns is for most of our kids…

But if you think it would be an awesome experience learning to shoot with two SEALs over your shoulder, then I bet you’ll think it’s even more awesome what I did next.

I Invited My Friends

I’ve become somewhat open about the stuff I do.

For a decade I was too embarrassed to admit that, um… I’m into Eckhart Tolle, but these days I pretty much just share how it is.

That said, I still felt I was going a bit too far when I wrote about training Remote Viewing with one of the greatest men I know, psychic spy, Joe McMoneagle, but I was surprised by the response—

I want to do that. Let’s plan a group trip!

And that got me thinking…

What would it be like if I put together a group to have some of the experiences that have been so transforming for me?

We become different people when we learn something new.

One of my clients sees it in her kids in that when they feel they are “smart” and learning, they walk a little taller.

Many years of reading books was powerful in transforming the way that I thought about things, but it has been new experiences that transformed me and my life.

Take learning to sing, as I wrote about here. Leaving Goldman Sachs, I didn’t know who I was meant to be. I had been a “successful banker,” yet here I was in a studio up the stairs next to a gas station on Olympic Boulevard, singing terribly to my tatted-up teacher.

There’s a great “ordeal” in learning a new skill, and we transform through these experiences.

Standing In The Desert

To some people it’s a weekend thing, but to us non-gun folks, standing in the desert popping caps is a unique thing.

The Alpha Team I took to test Geoff Blades Experiences is an inner circle of buds. 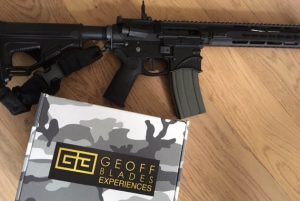 And although we’ve had some amazing experiences together in the past, we’ve never done anything like shooting, let alone deeply immersing in learning a new skill.

Ahead of the event I spent months equipping my team with the micro skills that drive great tactical shooting—e.g. shooting both eyes open, walking with soft knees keeping the gun stable, grip strength, etc.—to optimize the amount of learning they would get in one weekend.

Having had this experience for myself, it was amazing to see how quickly they developed skills, and even more amazing to see them step off the line different men.

Life Is A Transforming Experience…

Life is one long movie that we choose how we experience every day.

Too often we find ourselves playing the same old movie, when it is new experiences that bring us truly alive.

A kid laughs 400 hundred times a day. On average us adults laugh just 12!

Yet when we get out of our adult routines and immerse ourselves in fun as hell experiences learning hard skills we transform who we’ve been.

You can’t learn a new skill and remain the same. All experiences change us in some way and some skills like pistol and rifle shooting transform us in many more ways.

Shooting Forces You To Think

You’re forced to think about the morality of guns and lethal force.

Not for a moment can you take your mind off even a holstered pistol. You must learn to quickly manipulate the weapon system, not just for firing, but for transitioning from rifle to pistol, combat reloads, clearing malfunctions, navigating cover, etc.

Perhaps more importantly, you must learn a lot about yourself and your mind to become a proficient operator. (e.g. the flinch you get from firing live relative to dry)

And it’s not just about our individual learning, but who we become having these experiences as part of a group.

Many men feel lonely for real male bonding experiences, and ashamed of those activities that our society judges us for.

There’s something magical about getting a group of like-minded people together to deeply immerse in learning a new skill, that leads the entire group to bond and grow.

What Experiences Transform You?

Often when I talk to people about transforming experiences they talk about the ones that have had the greatest impact on them.

My friend John (not Wick…) went backpacking after college which more or less set the course for his entire career.

One of my buddies first jumped from a plane as a young man, which led him to a career jumping behind enemy lines.

What one of my friends learned in the Peace Corps. led him years later to start a business.

What experiences have been transformational for you?

Why were you drawn to those experiences to begin with?

What are the most amazing experiences you’ve had in a group?

Can you think of anything now that would be a transformational learning experience for you?

Tell me about it!