One of the tenets of my life, and the thing that has allowed me to keep creating the most amazing life I can imagine, is that I prioritize learning above everything else.

To that end, I feel very grateful to the people who have written the thousands of books that have helped me keep growing, and to the world-class mentors and teachers who have groomed me.

When I was wasting time.

“Wasting time” is a phrase people use with a negative connotation, but for me at least, wasting time means doing something I want to do, even if I can’t explain why.

I want to learn to sing, but can’t figure out why? Well, better go spend some time learning. My brain has a reason for it, and I know if I do what “I’m told,” I’ll get something I need out of it.

Living that way is odd for a lot of people. When they were kids it was easy, but as adults, they’re out of the habit of doing things that they can’t directly connect to “making progress,” and they criticize themselves for wanting things that aren’t obviously beneficial to them in “serious” ways.

But life is too important to take seriously, and when you venture into these other areas you learn things that often surprise you. Here’s the three most important life lessons I learned by wasting time.

1. I Learned To Embarrass Myself By Singing 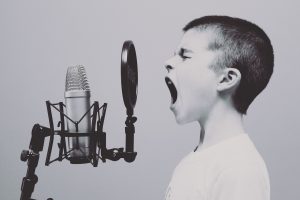 We live in a pathetically cynical society. When I first decided to learn to sing, it wasn’t because of some deep ambition. I didn’t want to be Beyonce. I just thought singing sounded fun.

But not to everyone. I can’t tell you how many people shared their opinions about my new hobby that went something like:

They couldn’t understand why someone would dedicate time to becoming better at something that wasn’t part of the obvious linear progression of their life. Strangely, doing something just because it seems cool and fun was strange to them.

A lot of people struggle with this. Hobbies to them are very passive, noncommittal things, like, ugh, standing around some bar talking about the same old crap with the same old people. Anything that requires an actual investment of time has to have some “tangible value.”

What they didn’t see—and what I didn’t plan for—was that singing was changing my life.

My first lesson was so awkward it’s honestly painful to write about. I’d never sang in front of another human before, and here I was belting off some Radiohead song that forced me to try and hit some of Thom Yorke’s high notes.

If I strangled every cat on the planet at the same time it would have sounded better than that, but the act of being willing to sound awful and no longer feel so embarrassed was changing me in ways I couldn’t have imagined.

Fast forward a handful of years, and that embarrassment paid off in ways I couldn’t have foreseen. Not only am I now in a profession where having trained my voice for a couple of years has massive benefits, but my career demands I constantly embarrass myself in public 🙂 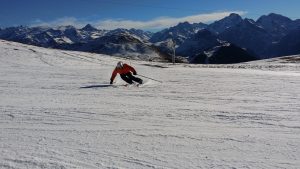 One of the foundational questions everyone in the personal development world has to answer is “How do we change ourselves?”

It sounds simple, but it’s really one of the most important questions we can ask as people. Whole schools of psychology have formed around divergent answers, most of them pathetically misguided. It’s one of the big questions neuroscientists have pursued over the last few decades.

How does the human brain change itself? What drives neuroplasticity, the brain’s natural ability to make new connections?

The best answer that we have discovered is: New and different experiences. That is, the human brain reconfigures itself based on the way that we use it. Hence, if you want to think differently, use your brain differently.

I moved to Vail at a time in my life where I needed to get out of LA. Having left Wall Street some 6 months earlier, struggling to write, struggling even more to get comfortable with embarrassing myself in public, I needed to hit reset.

Asking myself one of my favorite questions—If I could be anywhere in the world right now, where would I be?—I gave up my house, packed up my stuff, loaded up my AWD, and a month later was living in the mountains.

Since I got into skiing in University, I had romanticized skiing a season, and now I was finally doing it. While I knew it would be an incredible and fun experience what I didn’t realize was how much it would transform me.

Being isolated in the mountains “forced” me to grow. Knowing no-one gave me a chance to, in a socially acceptable way, be anti-social. Sitting on the lift every day with new people gave me a chance to keep reinventing myself, being whoever I chose to be.

Beyond the thrill of skiing, and the challenge of pushing my body every day, the mountains fundamentally changed me. I found out that when I withdrew to my inner cave, cut off from the world and alone with my brain, I saw things differently. I was freed from judgments by the outside world, removed from distractions, barricaded against any resistance to writing.

It was just me, the snow, and my book—and I became the person who could write it.

I’ve since spent two more seasons in Vail, each time “upgrading” my body and mind. Learning to “go to my cave” in order to change was one of the most valuable lessons of my life.

3. MMA Taught Me How To Get My Ass Kicked 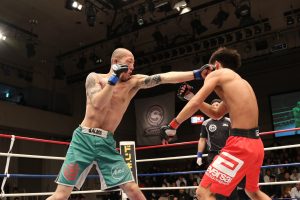 Powerlessness is a horrible feeling, and it’s one most people have some experience with. There’s nothing more disheartening than feeling like you can’t control your own life, that you are a victim of circumstance.

I dealt with this for a long time. I’d achieved a lot in my life, and yet I still felt like I couldn’t fully control my life—at least to the extent that I wanted to.

At the same time, and perhaps in some ways as a result of this, I was angry. I was never outwardly hostile to other people, but internally, I was frustrated, impatient, and ready to lash out.

Subconsciously, all of those things bubbled up into a fascination with fighting, and at around the same time I started reading self-help books, I got into muay thai. I didn’t specifically know why, but it was calling me, and I knew it was part of transforming.

Some six years later when I quit Goldman Sachs, my hobby turned into more than a hobby, and I began training MMA a few hours a day, 6 days a week.

Whereas months earlier I would get up and go to work, MMA became my go-to. Early morning boxing, followed up by muay thai or jiu-jitsu, training with UFC legends became the anchor of my life.

At the time it was strange to most people, including myself, but it felt good, so I just went with it. Beyond the physical exhilaration of the sport, MMA changed my life forever. It taught me to take back my power, but perhaps not in the way you’re expecting.

Getting kicked in the head is an unavoidable part of MMA. Black eyes, and a sprained shoulder, which put me out for a couple of months, are too. It doesn’t matter how good you are, when you step into that environment, you will meet people who are better.

But you can never recover from failing to step into the ring in your life.

Make A Resolution To Waste Some Time This Year

I write a lot about building methodical systems for consistent growth in your life, and that is surely the best recipe for winning.

However, I also encourage you to be impulsive. Do something you want to do, but can’t figure out why. Your brain is smarter than “you.” Trust that it has a reason for wanting what it wants, and humor it, explore that thing.

You’ll learn something about yourself on that journey, and you might even learn to sing.