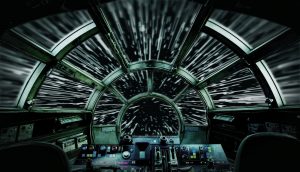 It will soon become what I’m known for.

Hard-charging people with massive visions will keep coming to me for the small role I play in helping them make massive leaps.

Clients are leaping to the stratosphere right now.

We’re seeing the same in our business, and that’s my map of reality.

As I write about here, my life is transformation.

And that’s what I’ve seen.

The conscious, time-based mind is a linear processor.

This of course is the “normal” way of orienting to reality, but it’s not the only way.

In your dreaming reality, which is 1/3 of your semi-conscious life, all time is happening at the same time.

A paradox in quantum physics is how a cat can be perceived dead and alive at the same time.

The same is true for quantum leaps, how an atom can seemingly materialize at multiple points in space time.

At the basic physical level, the binary computer-like brain needs one or the other to be true.

But at the quantum level, even glaring contradictions are true.

For any and all things at all times are possible.

This now isn’t some tiny sliver like the space between the second hands that the computer brain naturally equates it to, but a vast expanse of all time materializing as now.

Not saying this is the truth of reality.

Just that if you perceive it is one truth, rapid, massive leaps become more possible for you.

“It feels there’s something next,” said a new client.

Looking back he’s seeing the massive leaps he’s made in his business, but looking forward he’s drawing a blank.

With what he’s achieved driving to the top, there’s no obvious leap from here.

He’s created generational wealth, made an enormous impact, and it’s easy enough for him to hang up the jersey.

Yet he has this feeling.

A familiar feeling he knows well from before.

“Every time I’ve had this feeling, it’s been setting me up for another leap,” he says.

In his mind this is how success works.

It’s not just the small incremental steps adding up that he’s taken for decades, but the step-changes, the massive leaps you make that quickly thrust you to the top.

Already seeing the world works this way “qualifies” him for us to engineer his next leap the same way.

My Upgrade Cycles are for rapidly making massive leaps.

As I wrote you here on August Man and 3 types of change, all day every day I’m working on daily and continuous protocols for optimizing the way you think, feel, and the actions you take.

These incremental steps are devastatingly powerful daily processes that keep enormously benefiting me.

Some of the stuff I uncover here gives me fuel I burn for years.

I may write you about my last Amsterdam Upgrade trip in 2017, which laid out a path I’m still daily conditioning.

August Man was built with the same intent, to make another enormous leap, yet it exposed something new for me.

Over the years of continuously upgrading my mind and actions, my cycle times have been rapidly shortening.

I’m integrating learnings much faster, and seeing them materialize almost immediately in my reality.

Here I’m not just talking about results which are crystalizing more rapidly than ever, but also in the mind and action responses I’m getting from the “Geoff Blades Machine.” (analogous to the “Machine Teaching” I’m writing about here)

This is what led to these back-to-back monthly upgrades, as the things I integrated quickly in August I could see leaping to a new level in September.

I use so much shortcut language for the methods I’ve built that I forget how much I’ve shared with you.

One of my most important, you see stuck on my computer screen, is “80/20 Mind and Actions.”

This means to use the Pareto Principle—btw, a book I love on this by founder of LEK Consulting Richard Koch—for both your mind and actions.

Meaning, we readily accept the Pareto Principle is a natural law, that say 80% of your revenues are driven by 20% of your customers, in the same way that 20% of the earth roughly comprises 80% of the snowcaps.

Yet, we don’t often consider your thinking the same way.

Namely that 20% of your thoughts drive 80% of your responses.

So you want to optimize your mind and actions the same way.

I went deep into this in August Man, with all three of these August Man and now September Man goals oriented this way.

“Dial in 80/20 Mind and Actions for materializing next leap,” was the shortcut I wrote for myself.

These I refer to as your 80/20 Leaping Mind and Actions.

Let’s talk about these two categories.

In my daily and continuous practices I’m constantly tweaking, iterating, improving my 80/20 actions.

This again comes back to my system for ultimate days, where I’m targeting a 100% day, for optimizing every thought and action.

Yes, yes, keep in mind here as the average say to me, “But you know that you can’t achieve perfection.”

That loser mentality might be right, and this isn’t to say that I will ever achieve my 100% Mind and Actions Ultimate Day, yet it’s a method that keeps you improving on your best every day.

Dialing it in day after day leads to massive progress over time.

Yet when you’re living leap to leap, you too want to be looking for what materializes massive leaps at any point in time.

These Leaping Actions might be doubling-down on some of your existing actions, such as a client who is doubling her sales calls every week.

Or they may be new actions, which if you’re paying careful attention you’re seeing us make in the world, which are specifically engineered for massive leaps.

These might be hard things that you haven’t done before.

Perhaps actions that you’ve newly identified as catalysts for massively amplifying your results, something the Upgrade Cycles are built to identify.

Or, as is often the case for me, you may be accelerating the implementation of processes that you’ve already been working through.

An example is the way a leaping client is delegating now.

This year, daily and weekly he’s been dialing in his leading and managing processes and skills, so he can keep getting more leverage from his team, and focus his time on his highest value actions for driving scale.

Yet too as part of his Summer Upgrade, he’s very quickly offloaded crucial tasks that would have taken him much longer to delegate to his team.

Already this is materializing for him the next transformational leaps in his business.

And also, perhaps more importantly, in how he’s enjoying using his time.

Getting more tactical at this, you might consider these Leaping Actions in terms of the second step in my system for doing what you want.

This step, Getting It, is the intelligence inside your system.

It’s getting super clear on what actions truly matters to driving the results you want, and then setting yourself up to do it.

This is where August Man began for me going deep into our current winning methods seeking to identify actions that are now materializing massive leaps.

Back then I was layering these into my system for ultimate days, so I could get the Geoff Blades Machine to rapidly make these changes for consistently, repeatedly, better and better taking these new Leaping Actions.

That’s what we’re doing, and we’re seeing the leaps materialize.

I wonder, what might these Leaping Actions be for you?

A reason it’s easy for me to help this new client make his next massive leap is because he’s already bought into making massive leaps!

There’s simply nothing I can do for small-minded people.

Certainly I can help them make small changes, small advancements, do a little improving here and there.

But I’m not built for that.

It’s easy, boring, lame to me.

Other people who call themselves coaches might be good enough at helping them do that, so they have no need for me.

And I need to keep surrounding myself with people thinking massively.

I love to be surrounded with massive thinkers, who already know they can make massive leaps, where we can partner to materialize it.

Not saying here that if you haven’t already made massive leaps, or don’t believe it’s possible that you can’t make massive leaps by stepping it up slowly over time.

Thousand mile journeys are made this way and all things seemingly materialize through small steps in time.

Just saying that if you want to make massive leaps rapidly, and then keep making massive leaps over and over again, you best want to condition your brain to see reality this way.

Now, truth is, when this client came to me he couldn’t quite see it.

He could “sense it,” knew it was brewing.

But he really wanted me to help pull this feeling into him, and lay out a path that gets his brain fully bought into what’s possible.

The “Mind and Actions Path” we’re building together isn’t just for conditioning his mind.

A mistake many dreamers make is buying into the BS that you manifest in your mind.

When the ONLY way to deeply condition your mind for believing in massive leaps is to be taking the actions that “convince” your brain of what is possible.

But also at the same time I strongly suggest using “tools” or “devices” to directly condition what you perceive to be possible in your mind.

Yes, yes, I know I talk about tools and protocols a lot, and it can sound real fancy.

But keep in mind like the Performance Tools in my book for Building Your Limitless Mind, this can be extremely simple.

As we got talking about the leaps that he might take from here, my client got all excited.

He started thinking about some of the things that might be possible, and that’s when he gave me this metaphor that I merely presented back to him.

“It feels like the Millennium Falcon jumping into hyperspace,” he said.

That’s all the map I needed.

After the call I sent him the picture you see above and told him to stick it on his desk.

“So all day every day you keep reminding your brain that right now you’re massively leaping into hyperspace,” I said.

Again, you see this is simple, and there’s lots of simple and advanced ways for you to do this, and what I’m merely suggesting is…

Developing the methods that are right for you.

I’m not saying here that you want to stick on your desk a picture of a fictional craft leaping into hyperspace.

We’re using the metaphor his brain came up with to keep conditioning his next massive leap.

You’re seeking the metaphor, tool, device, whatever you call it… that is right for you.

Can you think of a simple “Visual Cue” like this to keep reminding yourself that you’re now materializing a massive leap?

And what about your actions?

What are some 80/20 Leaping Actions you’re identifying in your September Man or Woman Upgrade?

And, how are you rapidly conditioning yourself for taking them?

I cannot know where you are headed, my friend.

All I can say is that around me I’m seeing massive leaps, which tells me the same is somewhere around you.

I can’t say where your leaps will take you.

But I am suggesting that even the most seemingly impossible goals are only leaps away.