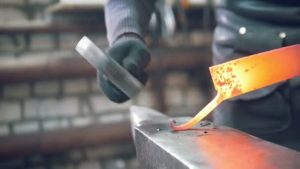 For years I sought better ways to characterize the pursuit of success.

I could see that, ultimately, success is the pursuit of development, that it’s not only (or perhaps at all) about what we “achieve” but much more about who we become.

A real goal is one that is bigger than us and requires growing if we are to succeed.

If you’re not strong enough to pick up a heavy load, then you either leave the heavy lifting to someone else, or you choose to get stronger.

We fail to grow if we’re not stretched, and to forge ourselves into our greatest, we need a goal that forces growth.

I call this an anvil.

To forge steel you heat it up with a flame, and bash it against an anvil.

Of course nobody asks the steel if this is a pleasant experience, but one would like to believe that it’s worth it to be forged into what you’re destined to be.

Success can feel much the same.

Our society likes to celebrate those who have achieved, but we seldom like to go too deep into what it took for that hero to become this way.

Watching Elon Musk in the world, does anyone think it looks like a laugh a minute?

Sure, plenty of people would love to be a billionaire, but how many would step into the heat and beat themselves against the anvils of SpaceX, Tesla, Boring, SolarCity, and all else that man does?

(I don’t know how he does it without Geoff Blades yet on his side… struggling is how :). Let’s take it to another level, Elon!)

Many of us dream of achieving great things. We dream of becoming great men and women. But we shy away from the anvil because we want an easier way.

Love It Coz It’s Hard

When I first moved to Vail mountain in 2010, I wasn’t there just for the snow.

Back in LA, this mission broke me. Taking on a goal that was mind-busting hard, that I wasn’t good enough to achieve, my anvil beat me into submission, and I retreated to my mountain chrysalis to transform.

I knew that if I was to succeed in this nutso goal that I needed to become better and stronger, but I didn’t know what that meant.

It had been so hard and I just wanted it to feel easier. Working 17 hours a day, I couldn’t do much more, but I was still lousy at my goal and my mind was still busting at the seams.

For months in Vail I cried out for it to be easier, but one day I came to a powerful realization.

On the mountain I was charging the most extreme terrain, hard.

Admittedly, with a bit of a death wish back then, every day I was bouncing through trees, hitting steep descents way too fast, hucking cliffs out of bounds, popping air anywhere I could.

It struck me, I never skied the easy stuff. What would be the point? I love skiing the hardest terrain, and I began to see my work the same way.

I had ejected from an easy and boring job and taken an anvil to the face. Now I had to work with the anvil to forge steel.

Work With The Anvil

It is said that Mike Tyson’s punching power is the equivalent of having an anvil dropped on your face from five feet in the air!

Getting hit by the anvil can wreck you, in some cases it can end us, and it’s crucial to learn how to navigate your anvil.

An anvil beats steel into submission, and if we can’t work well with our anvil it does the same to us. (including Iron Men like Elon, as I wrote to him here)

When I was being most beaten by my anvil I was trying to force actions that I wasn’t ready to take. Like standing square in front of Tyson waiting for that knockout blow, I was DOA.

Getting excellent with the anvil involves navigating heat and taking a pounding, but preserving yourself to fight another day.

The more you do this, the more you learn the anvil rarely ends you, and, in fact, it is here to serve you.

Working with your anvil, like a workman’s hands you get stronger, and you develop yourself into the person your goal demands you to be.

Use Your Anvil To Develop

The greatest gift an anvil to the face gave me was to show me I was too weak in my mind.

I’d never been weak in my actions. I’ve worked around the clock since I was 16 and expect I will until the day they burn me up and send me into space, but I’d never taken on the mind.

It’s easy enough to force yourself to work when your job depends on it, or to do what you “need” to succeed, but chasing truly ambitious goals demands far more.

Crushing it in school and achieving in high-paying jobs I tricked myself into believing that I was more capable, but testing my mettle against the anvil exposed where I crack.

When you put a damaged bicycle tire in a bucket of water you can see the air leaking out and find the hole you need to fix.

And when you’re willing to beat yourself black and blue against the anvil you see exactly where you’re weak, and can identify how to develop and improve.

Unless you pressure test it, you never know if that tire is fixed, and until you work with a worthy anvil, you will never develop into the greatest you are destined to be.