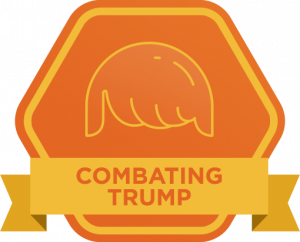 That’s what I think when my brain tells me to write on this topic.

It’s gotten me into enough trouble with fans on both sides of the aisle, when I only care about winning.

What leads to more winning for America?

And what will lead Biden or Trump to win this election?

Watch the polls, listen to the narrative, and once again, it’s obvious Trump will lose.

It was a good move if the Dems could pull it off.

That’s the way they’re most likely to get beat again by Trump.

I’m not one to talk about whether Biden is punching at his best, but this is where Trump does.

Starting from scratch, building momentum from nowhere, keep in mind that the mainstream saw him as a joke.

The Huffington Post called his campaign a sideshow, and covered it not as politics, but entertainment.

He said so many outlandish and offensive things, including saying John McCain wasn’t a war hero.

Yet, still, “somehow” he thrashed the GOP, and then beat Hillary.

In the book I wrote on how Trump thrashed the GOP, the first chapter captures the most important part of Trump’s winning method—

He is masterful at hogging the spotlight, and getting the world’s media to nonstop say his name.

Good or bad attention, it’s all good for Trump.

As he put it, “Good publicity is preferable to bad, but from a bottom-line perspective, bad publicity is sometimes better than no publicity at all. Controversy, in short, sells.”

Just like last time, the more Trump is hated on, the more he’s winning.

Doesn’t matter how much he’s disliked

Everyone knows the media’s main bias is using Trump for traffic.

Whether you think they’re on the left or right, they’re only rightfully getting people to tune in.

To those watching the airwaves, you’d think Trump is toast… just like last time.

Yet what’s so bizarre to me is why anyone would possibly believe the polls?

Most Trump voters of course aren’t running around with MAGA hats on, telling everyone who they vote for.

And even if the polls were accurate, all that matters is who turns out on game day.

Voter turnout is ALL that matters

We all get this.

There are two teams competing here, and an election is determined by which fans show up to vote.

The biggest mistake the Dems make is constantly marketing the message that their die-hard fans want to hear.

They’re already on the bandwagon!

Already showing up to cast their I hate Trump vote.

Trump’s passionate supporters are the same.

Savvy political operatives know you’re never marketing to them, but to the other swing and sometime voters.

Obama was masterful at this

Obama was a community organizer.

Like AOC he deeply gets this game is about motivating people to show up and support you.

Trump has of course proven he well gets this.

And after 50 years in politics Biden well gets this too.

But we all know he has never inspired a movement like the others, or even sparked the type of passion that Bernie did.

Biden is on the bubble.

Settle for Joe is a phrase I’ve heard Dems using.

No inspiring call like Yes We Can, merely a campaign defined as “not Trump.”

Maybe it will work, he’s a likeable guy with a big following, and there’s of course no shortage of dislike for Trump.

Michael Moore gets this

He’s a savvy political commentator who saw all this last time around.

And he’s seeing it again.

Despite all the negativity on Trump that you expect to see in the media, Moore sees the momentum he has in the battleground states.

As he was quoted here, “Are you ready for a Trump victory? Are you mentally prepared to be outsmarted by Trump again?”

Moore is concerned for the right reasons, and giving his base more reason to turn out.

Will he inspire or Trump fire?

An election is a game of skill.

Yes, yes, I know that too few people want to believe that Trump has any skill.

Yet in calling him a huckster and conman, obviously they get he is very good at one thing—convincing people.

As he did in convincing the country to help him beat the GOP and then Hillary, that’s what he’s good at.

In fact, as I titled my book, that’s what he’s a wizard at—influence.

He knows exactly how to label his opponents (e.g. Low Energy Jeb, Sleepy Joe) in a way that destroys them.

And particularly when facing off in a debate, how to push them off the stage.

It must be remembered that before Trump showed up in 2016 Jeb Bush was the easy favorite.

But after a few beatings from Trump he barely got any primaries, and as Trump mocked, kept getting moved further and further off the stage.

How Biden shows up will determine this election

One thing that’s stupid is people making their little election predictions based on, what?

Like calling a boxing bout before you’ve seen the opponents go toe-to-toe, it only makes for good manipulating of attention.

Fact is, if Biden shows up in a way that convinces people he is far more capable than Trump, they will show up to elect him.

But if on the other hand, he fails to draw people in, even those who hate Trump will lack the motivation they need to get behind him.

Sure, to some anyone is better than Trump.

But those who will determine the outcome of this election will need to believe much more.

Whether Biden or Trump is left standing will be determined here.

Which, as I said, having modelled how Trump annihilated 16 of the GOPs finest on the debate stage, Nancy Pelosi and the Dems are smart to try and avoid.

P.S. Perhaps I should have kept my mouth shut, but in addition to the book I wrote on how Trump thrashed the GOP, I also reversed it in this free Masterclass for how a winning candidate could combat Trump.