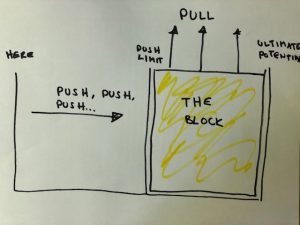 “You can only push yourself to the wall,” I said to him.

So what takes you all the way?

I drew him this chart

I draw a lot of charts for myself.

There was a time in my old apartment where every wall was covered with charts.

Laughing about it, but being serious, my friend Liz used to say, “hmm, I hope you don’t bring people over here…”

That apartment I saw as my lab—like a scientist scribbling all over a chalkboard looking for a solution, it was where I did my work solving the mind.

When I moved and took all the charts off the walls I counted some 36 charts, just in my office, and I won’t tell you how many in total.

The point being that I’ve always been able to “see” developing more clearly than saying it.

So I showed him this chart that you see above.

But hopefully you get the point.

That you can only push so far.

From where you are now, you can push all the way up until the Push Limit.

But from here, the only thing that will reach your Ultimate Potential is…

You must pull out the block.

That’s the reason I’m sharing this with you in a chart.

It’s like one of those Rorschach tests in that, by looking at it this way, I’m curious what your brain will see.

What do you perceive might be some of your blocks, or perhaps The Block?

See, coz one of the hardest things in all change is being able to see what you can’t yet see!

I could tell you that the block is a fear of failure, or fear of disappointment, or you’re afraid of your infinite potential, or whatever…

It might all sound good, you might tell yourself the same types of stories, but what is really there blocking you?

This can be elusive.

And often in life we’ll keep push push pushing over there to avoid seeing what is right here.

Getting to your block

You are who you are based on all of your lifelong conditioning.

And most of what has molded you, unfortunately, has been pain.

You put up your hand in class, got the wrong answer, people laughed, and that imprinted on a young mind that you’re better off staying quiet.

Or, like in my case, you had a rough experience with a boy or girl in your teens, and that made an “imprint” that drove you for years, and maybe still does…

Or, perhaps in the arena of success, you learned a certain way of going after it.

Where you can convince yourself you’re doing everything you can.

But, ultimately, you’re avoiding the things over here that make the most difference because it’s safer to go about it that way.

Eating to avoid feeling bad, or drinking or drugs to escape your mind.

Because it can be easier this way.

Rather than admitting to ourselves what’s really going on, we can unconsciously suppress what you’re not yet ready to see.

But then, when you’re ready, whoa, now you see it.

And you have a chance to pull it out.

With the client I showed the chart to, his block is…

At his conscious level, meaning the level of your brain where you’re willing to actually admit things to yourself…

His block was one of comfort and risk.

In his brain, that meant he needed to “push” outside of his comfort zone.

But that wasn’t his real block.

The real block I spent time on the phone pulling out of him, without him knowing!!

Another person I spoke to this week kept talking to me about how he wished he could get his team going after it more.

He kept talking about how he is doing everything he can, but he just can’t seem to get them here.

The Block he wasn’t willing to see is…

It’s a block that many leaders have.

He wants to be liked, or more specifically, he’s scared of being disliked, so he’s unwilling to really manage his team effectively.

That was something I didn’t point out, but playing around with some stuff outside of his awareness, hopefully after he got off the phone he was closer to seeing it.

This is sneaky but it’s my job

See, look, my point is that…

If someone points them out to you before you’re ready to see them, you will argue as viciously as someone who says “All Lives Matter.”

See, that person through their own lens isn’t willing to see what others see.

They’re blocked, their brain has to say, but hold on a minute, all lives matter.

This block leads them to push against it, when, if only they pulled out that block, they could see through another’s eyes what is equality.

So my point here isn’t to say…

I know what your block is.

Of course I don’t.

And even at a conscious level you might not yet be willing to see it.

But at some deeper level, and some deeper day, that might be today, your brain will show you that block.

And then you get to pull it out.

That’s what my client saw

He saw his block.

He pulled it out.

And all that push, push, push that we’d been doing to unlock his full potential…

Well, perhaps it was only intended to put enough pressure on that block that he could squeeze it out.

What’s all this making you see?

What blocks might you be seeing and removing to become who you are destined to be?