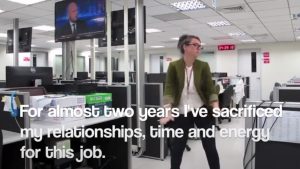 You’re going to quit at least one job in your life, probably several. In fact, 2.8 million Americans quit their jobs every month. You know what’s heartbreaking about that statistic?

Virtually none of those 2.8 million people know how to quit their job and still win.

You need to approach quitting strategically. You must recognize early when it’s time to leave, and set a plan in action to do so in a way that most benefits you.

People who ignore their unhappiness—who wait until their situation is so desperate that they’re forced to quit—they’re the ones who leave with too little to show for it.

First, you must recognize when it’s time to quit.

How To Tell It’s Time For You To Quit

Knowing when to quit your job requires being brutally honest with yourself and asking, “Am I excited to be here?” At it’s core, that’s what this is all about—excitement.

Let me give you an example. When my friends or clients have decided to quit their jobs, they often come to the decision in different ways, yet they all start in the same place.

They begin with the feeling that something isn’t right, that they aren’t as excited about their life as they should be, that there is say, “more to life than this.”

The ones who bury that feeling deep inside wind up wasting years at a job they don’t want, only to, when the proverbial final straw breaks their back, exit without a strategy.

The ones who trust that feeling and investigate it are the ones who quit their jobs and win.

To start being honest with yourself, ask yourself these questions:

People often assume work should be a slog. Everyone has trouble waking up. Everyone needs coffee to get going. Everyone imagines being on vacation while they work.

People who are living the life they want wake up pumped and excited to dive into their day. They don’t need a liter of coffee to get going in the morning and don’t spend their days fantasizing about being somewhere else.

People who are living the life they truly want tend to have one other thing in common:

They didn’t magically find themselves where they are.

Instead, they’ve moved strategically from job to job, collecting the skills, experience, and relationships to be where they are.

In other words, they’ve learned how to quit their job to keep winning.

How To Quit Your Job In 3 Steps

There is a formula for quitting a job in a way that moves you closer to your dream life, and it’s a simple three step process. While your specifics might differ, in general, this approach works for everyone.

1. Figure out why you want to leave

But don’t stop there. Go deeper. Why do you feel that way? Why do you put off tasks? Do you lack the skills to do them well? Are they opposed to the kind of work that excites you?

By asking yourself those questions you can understand what it is about this job that unsettles you, and begin formulating a new plan.

2. Figure out what you want

This step takes a mental flip from the last point. After listing out all the reasons why you don’t want to be where you are, you need to figure out where you do want to be.

Now, truth be told, for many of us, creating a vision for our future is a daunting task, but it doesn’t have to be. You’ve already created a list of qualities you know you don’t want in your life, now focus on the positive qualities that you do like.

Maybe you hate being isolated from people in your work, and so you can begin by saying to yourself, “I’m not sure which job I want, but I know it involves lots of personal interaction.”

3. Focus on the action right in front you

A mistake many people make on this topic is becoming overwhelmed. They look at what they want their life to be, and they let the weight of that massive vision crush them.

To avoid this problem, instead of constantly focusing on this “big vision” of what you want your life to be, instead every day focus on one thing: What action are you taking to keep moving in the right direction?

Don’t worry about stepping straight into your dream life tomorrow, ask what action will move the needle in your life today. What skill can you start learning today that will help you get there? Who can you meet today that will bring value to your life?

You might think, “Well sure, Rome wasn’t built in a day, but that’s not a massive insight.” But you’re wrong. This is about more than incremental progress.

As you move through life, your vision will inevitably shift. What will not shift, however, are the skills and relationships you build. By focusing on adding value to your life every day, you make yourself more independent, more capable of chasing dreams even as they shift.

Most importantly, this makes you less fragile. The more capable you make yourself, the less vulnerable you are to the whims of the job market. As James Altucher says, “The best entrepreneurs are not risk-takers. They spend every day reducing risk.”

You’re adding something permanent to your life: Potential.

A Good Exit Plan Means You Leave Without Burning Bridges

If you follow the process above and remain focused on taking actions that benefit you, it is easy to quit your job without ruining relationships.

A lot of people fantasize about giving their boss  “a piece of my mind,” on their way out the door, or making some dramatic exit—like this woman who literally made a video announcing her resignation:

Not taking anything away from the hilarity of the video, or the benefits of her newfound fame, but that is the worst way to quit your job.

When I quit Goldman Sachs, I sat down with my bosses and told them I had to leave. I was open, positive, and respectful, and they responded in kind.

Professionals understand that sometimes a job is a bad fit. It’s nothing personal. If you quit in this way, as a termination of a contract but not a relationship, then you can leave without burning your bridges.

Often, this means being patient.

Take Your Time To Quit

From the day I began my work exploring leaving Goldman Sachs, it took me another six years to actually leave the firm. Six years!

I know that sounds ludicrously long, but that is how long it took me to make two more career moves inside the firm, stash away some savings, and, most importantly, do the work to convince myself that I was making the right decision.

This did a number of things for me:

I built this system by actually living it, and so I’ve made my fair share of mistakes along the way. I could have planned a little better, I could have been more focused on the next small steps, but the one thing I nailed was the timing of when I quit.

When you quit, don’t just rush to your boss and tell him/her it’s over. Take your time to decide what the next step is for you, begin building the skills and relationships you’ll need, and only quit when you know you can hit the ground running.

Why Quitting Your Job Is The Key To A Great Career

There’s an anxiety many of us feel when we tell our colleagues and our friends that we’re quitting. We’re afraid of the financial and professional repercussions, sure, but on an even deeper level we’re afraid that we are being ungrateful.

A lot of people reading this article are probably in this place right now. Even equipped with the system I’ve laid out, they feel held back by this sense that what they have right now is all they deserve.

A company will fail if they pay employees more than they contribute to the company, it’s math. If you think that by pursuing the life you want you are screwing someone over, you’re making your job too personal.

Jobs are an economic contract. You are selling your employer the precious hours of your life in exchange for getting what you want.. If your job isn’t getting you that, then what choice do you have?

Never let fear force you to settle. You can have—and deserve—nothing less than exactly what you want in life, and oftentimes that means quitting a job or two.