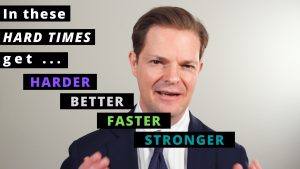 A private equity client said to me, “We’re lucky we got our fund raised last year.”

There’s still tons of hard things they face from this situation.

But if it had happened while they were in market it would have been a total mess.

You can never time the markets, or anything else.

They certainly had no idea that this was coming, but they did go to market with a sense of urgency.

“Make hay while the sun shines”

Another client said to me.

He had a booming last year and got some big deals closed right before all this happened.

Again, he had no clue this was coming but as he often says, “Squirrels prepare, for winter is coming.”

That’s been a powerful lesson many people have seen in this.

Some saw the opportunity to make a lot of hay since the last credit crisis.

But plenty others feel they missed opportunities when the times were good.

It’s not to say those opportunities are gone for good. (as I’ll write more on later)

Yet we know that in good times you can develop a sense of complacency, can’t you?

When that is surely the best time to be reaping what you sow.

Still playing off the back foot though

One client’s business has been massively impacted by this.

It’s sent him and his team mostly into triage mode.

Roughly it’s doubled the amount of things coming at them every day.

Nearly everything is “urgent.”

Working from home, the team apart, has made it much much harder.

Forced to play off the back foot for a few weeks was hard, but he’s done harder.

A decade he’s been building

Not just a great business.

But a great team.

And fortunately over recent years, we’ve been laying in top protocols for leading and managing.

All that mattered before when he was trying to build the best org that he could.

Which meant that for years he’s been making hard choices on this.

Going to the extreme to recruit the right team.

Putting countless hours into grooming people and building the right systems of accountability.

All that hard work he’s done for years has enabled him to activate the team in a way he really needs them now.

Playing off the front foot

Truth is, for some people, this situation is a window of opportunity.

A hedge fund client had spent months preparing to put a fresh book to work when all this hit.

Investing in this market is of course very hard, and fraught with danger.

Yet, too, because he’s spent decades mastering his craft and months specifically preparing to launch, he was as best prepared as he could be.

Also, the work he’s done over years on training his mind.

Sailing his way through massive uncertainty and volatility.

All massively paid off now.

The point I’m making here I’ve seen in my own business and with clients.

That there is absolutely nothing you can do to prepare for this type of situation.

Yet, also, every single day you can be best preparing yourself for what might be coming up next.

You may not have been best prepared for this change.

Maybe you’ve been scrambling to catch up now.

But no matter how prepared you were for this, you can right now keep getting best prepared for what’s coming next.

Here’s the free video program for Harder, Better, Faster, Stronger, which might be the best way to prepare for what might be harder times ahead.