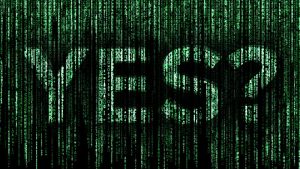 Certainly there are people out there who are more book smart.

But who on Earth is capable of dreaming and scheming on his scale and creating it too?

Relative to AI he appears merely human of course, but relative to say the titans who built America I’d say he’s right up there.

He’s a unique thinker with a deep curiosity and formidable intellect.

Still, his math is misleading.

Among Musk’s leading edge thinking is his assertion that we live in a simulation.

Apparently he is so convinced that he’s banned it from further jacuzzi conversation.

Musk rationalizes that there is one in billions of chances that we DO NOT live in a simulation.

Mathematically this means that the probability this reality you are experiencing is “real,” what Musk calls “base reality,” looks something like—

And for a moment, just think about what this means.

Whereas since birth we’re all taught to take this “real-ity” oh so seriously, Musk sees this more like playing a game.

Still, his math is misleading.

This is really the probability Musk is proposing that we live in a simulation.

Now, if you want to be literal one would say that his math is correct.

Core to Musk’s reasoning is that if we as a species avoid going extinct then we will create simulated worlds.

He logics into this by looking back at the video game Pong, and pointing out just how “real” video games have become.

Fast forward 100 or 1,000 or 10,000 years, Musk asserts that we will have therefore created billions of simulated worlds that are indistinguishable from this seemingly real world.

Therefore, according to his math, there is one “real world” that we might live in relative to billions of simulated worlds that we may be living in.

Hence, there is one in billions of chances that this is NOT a simulated world.

This is where his math is misleading.

It may be accurate that there are billions of chances we are right now living in a simulated world.

Still, it’s only 50/50 that we live in the “real world” relative to a simulated world.

And still, that’s not even the misleading assertion I care about.

Putting aside his math, the more wonky assertion is the phrase “live in.”

As I wrote about here, there are tons of smart-sounding scientists and others who research whether we “live in” a simulation?

And Scientific American here even “Confirmed! We Live in a Simulation.”

Still, what on Earth or anywhere else could this possibly mean?

How could anyone “live in” a simulation?

That’s like saying that characters are really “alive” inside a computer game?

What’s that definition of “alive?”

So if indeed this is some type of simulation that you are experiencing “out there,” then how could you be alive in here?

And where is here?

If this is a simulation, might we be jacked in from the outside, ala The Matrix?

Perhaps it’s just like a dream, where you’re laying here every night and a real-appearing reality is playing out in your head?

Or like Ready Player One where you are “locked into” some type of visor?

Maybe it’s more like The Thirteenth Floor, where we are simulated people in a simulated world?

Or even like Free Guy where we are AI NPCs in someone or some thing’s simulated world?

That’s where I come out on this.

I have zero interest in whether we “live in” a simulation.

It reminds me of about 15 years ago I got really deep into a topic called The Singularity.

You may know that there are Singularity universities and some of the smartest people in the world are focused on when humans will merge with AI.

The only knowledge I care about is that which you can use to make your life most magical.

I’m focused on what truth you can know and use.

To me whether we live in a simulation or not is just as irrelevant as one religious zealot arguing with another about which is the real God.

They all signal truth and all rely on faith, so I’d prefer to focus on what you can actually know, with 100% certainty.

And most importantly, that you can actually use to make your life most magical.

Perhaps these things are unknowable.

I’m focused on what is actually true.

That you can prove to yourself right now immediately in your own experience.

See, ultimately, I think all of this talk about the simulation is misdirection.

It’s the same misdirection that you see in every other facet of this world.

What’s happening in your body and brain.

You’re taught NOTHING about your internal experience of reality, let alone how to make it your absolute best?

What’s implied is that your internal experience of reality is merely a result of what’s happening in the “real world” that you see out there, isn’t it?

Yet what’s also implied is that the world you see and experience one third of your life when you are dreaming at night isn’t the real world either, is it?

Hmm, so what is this?

Hmm, so it’s 100% certain that at night your brain is simulating reality in you, isn’t it?

And what about during the day?

So while our smartest scientists endlessly theorize about a simulation that may or may not be outside of you, it’s 100% certain that the simulation is happening inside of you.

50/50 perhaps it is out there, as scientists will certainly be confused debating forever.

But 100% the simulation is happening in you.

And never just at night, but all day every day.

Again you can prove it to yourself immediately right now in your own experience.

Just get that brain of yours thinking about anything that isn’t happening right now around you.

Meaning, for example, just think about how a room in a previous home looks.

Obviously your brain is right now simulating this experience in you.

How about what’s happening somewhere else in the world that you may never have visited.

Just like it can right now simulate infinite scenarios in the future.

Or even just in this day your brain is constantly looking forward simulating things that may or may not happen, isn’t it?

This is The Simulation. (at least how it appears at Level 1)

It may be happening out there but it is 100% happening in you.

24/7 your brain is simulating experiences of reality.

Every single thing that you do, or don’t do.

It’s all happening or not happening based on the simulation that is happening inside you.

And just like when you’re dreaming at night, it’s happening automatically.

Thinking about this, that, and the other thing, all day that brain is bouncing around, simulating your past, present, and future.

Of course few of us think of this as simulating.

Yet, again, in your roughly sixty million four hundred and eighty thousand seconds of school, not for one second are you ever taught the real mechanism of thinking?

This brain of yours is all day every day bouncing around from one thing to another, automatically “thinking,” automatically simulating.

Being conscious means you know this and get to choose.

As I’ve said I care zero whether we “live in” a simulation or not.

Knowledge you can never apply is useless to me.

But when you get that your body and brain are 24/7 simulating the reality that you are experiencing every second.

And you have methods to choose your absolute best thoughts, feelings, actions.

So whether Musk’s math is misleading, or we “live in” a simulation or not, every second you choose your most magical experience of reality.