Writing this article earlier in the week, I thought I was so insightful highlighting the amount of worry that was wasted on North Korea.

Then, Drudge, with his sirens blaring and massive headline—NKorea Threatens To Cancel Trump Summit—reminded me that we can still find plenty to fear.

At first I thought, crap my article is outdated, but then I realized, actually, it’s even more timely.

We can allow our emotions to be whipped around by things that we can’t control—e.g. the worst people in our world, stock market, nearly everything else—or we can…

In nearly 20 years of researching these topics, there’s one crucial lesson that most stands out—

We are what we think.

Literally, what we think about is our ENTIRE experience of reality.

If you’re a football fan and spend all day every day immersed in football, this becomes your life.

If you’re an investor who spends every waking moment thinking about opportunities in the market, the market is your reality.

And if you’re tuned into fearful news all day every day, your life is full of fear and worry.

Around the time ding dong North Korea was doing his little public display of disaffection, my client told me about a weekend retreat he attended with a group of business leaders.

Over dinners and lunches they spent hours talking about the situation, indulging the fears, debating what to do…

None of them could do anything.

They knew nothing beyond what the media had told them. They aren’t in any way involved in military or government or any group that solves such problems, yet they spent their weekend infecting each other with fear.

It’s not just that we live in a world of propaganda—which is so dominant that presidential elections are, literally, won off of it—but because, especially in this case, it’s obvious there is plenty of theatrics going on.

Over time the so-called experts and propagandists gave us many intelligent-sounding explanations of the threat from North Korea, but I’m yet to hear an intelligent explanation of how it was resolved!

How did two mortal enemies who’ve been spewing hatred and K-pop across the DMZ for decades get to this WWE gesture? 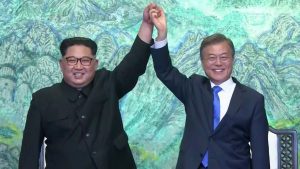 Many people spend their lives on the emotional roller coaster that is the drama of our world, but surely we are the last to know what is really going on.

Tuning into the awful news of the world we are constantly bombarded with misery, fear, and worry, little of which has any bearing on our lives.

If you were alive 500 years ago, terrible things were happening all over the planet that you never heard about.

Nobody felt “uninformed” because they couldn’t recite how many people were killed by some lunatic half a world away, nor did we live in fear of it happening to us.

It’s often said that half the things we worry about never happen.

With each of us cycling some 70,000 mostly negative redundant thoughts every day, I estimate that to be about 99.9%.

Sometimes for days, weeks, months, years we ruin our lives worrying about things that never happen; time we can never get back.

Even worse, when we tune into the drama of the world we ruin our days thinking about things that we have absolutely zero control over.

It’s one thing to have compassion and care for people who are suffering—like the many people who have been tortured and killed by that bad actor’s family—and another thing altogether to live as a spectator in their grotesque game.

Living Our Most Amazing Lives

When I worked on Wall Street I was immersed in news all day every day.

Convincing myself that it was essential to know the latest headlines, I burned far too many hours consuming low-value information, and that wasn’t the worst part.

Back then I wondered why I was constantly worried about where the world was headed, but it became patently obvious when I stopped fueling myself with fear every day.

It’s easy to forget that 10 years ago billions of us were terrified that our financial system was coming to an end, yet just like the previous billions of years of human evolution… we tend to find a way.

It’s true that Gangnam North Korea might have gone nuclear and wiped us all off the map, but even then, days, weeks, months, years of fear and worry wouldn’t change anything.

Worrying about what we can’t control steals our energy and attention away from what we can control.

They say that 1 hour of worrying is like 3 rounds of kickboxing, and that’s a lot of energy you could be putting into things that make your life amazing.

Intellectually, we all get this, but because our society is a soup of fear and worry, it can also be very hard to do.

That’s Why I Built These Five Questions To Stop Worrying

Many of us have a well-developed worry muscle, which means that even if we are attuned to it, we can quickly get sucked into our fear and worry.

Even if we know they are stupid, at the time they seem real, and ultimately we want tools to keep us in the right frame of mind.

For a stubborn mind like mine, this can require doing more than “deciding” to stop worrying, which is why I originally developed these Worry Destroyer questions for myself.

btw, sometimes I have to use all of them a number of times over, so don’t be shy in putting these to work.

1. What Can I Control Here? (Interrupt the Mind)

Think of the example I gave above.

A group of highly successful business leaders, with families and employees that are dependent on them, wasting what should be a productive weekend talking about something they have zero control over.

They had zero insight into what was really going on. Zero ability to affect an outcome. And even zero ability to do anything about a nuke that might be coming in their direction. They had nothing unique to discuss. No solution to offer. Nothing to add.

Prepare as best you can, then let it go.

2. When Do I Know To Stop Worrying? (Stretch the Mind)

This is a mind buster for me.

Think of it this way. If you’re worried about dying, do you have to wait until the day you die until you are liberated from that fear?

If you are afraid of poverty, how much wealth do you need to stop worrying about it?

If you’re worried that you won’t make it to your flight, when do you stop worrying? When you are on the plane? Through security? The terminal? Out of the car?

If you’re following 1. you know it’s out of your control, so you might as well stop worrying now, let alone then.

3. What Do I Think About Instead? (Redirect the Mind)

To keep rolling with the flight example. You can let go of worry because it doesn’t help you get there faster, and no matter what happens, you’ll figure it out.

What about North Korea? If you have decided to stop worrying when the problem is solved, you still might be waiting some time.

But if you had decided to stop worrying about what you couldn’t control, you could have left it behind much sooner.

The sooner you decided to stop worrying, the more you can focus on what you want and can influence. (e.g. bringing more safety and peace into our own lives).

4. How Do I Feel No Longer Worried? (Cementing it Behind You)

An amazing thing about worry is how it feels to put it behind us.

I once sent an email to someone that I desperately regretted sending. When I met him I was worried that I had offended him… He didn’t even remember 🙂

We all have stories like this, and what it feels like to put those worries behind us.

If it feels good to no longer be worried about fake Bond villain Jnr. North Korea, then it would have felt even better 6 months ago…

What are other equally irrational worries that you have been carrying that you can now put behind you?

5. How Do I See I Am Now Free To Propel? (Launch into Your Limitless Mind)

Ask yourself, with that worry behind you, how do now feel you can propel?

Every single thought is your reality.

And every single thing that you let into your mind becomes your thoughts.

These 5 questions are powerful, yet the most simple way to keep training your mind for less fear and worry is to live my First Rule of Mind Control—

Only Think About What You Want!

And if you really want to get good at this stuff, download the Free e-book to building your limitless mind.