After reading our report on Living Dalio’s Principles a client put a good question to me.

Is it possible that we give too much credit to Dalio’s principles because we’re biased by his success?

It’s entirely possible that while Ray asserts principles as the cause of his success, the radical truth is that we have no way of actually measuring their causality.

That’s the hard thing about “modeling” success. We can’t know what drives it.

Some people tell stories of how they got lucky and won the lottery, whereas others say they deliberately picked the winning numbers.

A way you might assess their skill is to have them replicate their success—which Dalio has done for years—but even then you might still struggle to distinguish skill from luck.

All success is similarly squishy to model.

Is Tom Brady’s success the product of his rigorous TB12 Method, or would he have crushed it anyways? Who knows?

What about Michael Schumacher? For decades he raced at 300 km/h, yet he was permanently disabled in a skiing accident. Was he under-skilled or out of luck?

Did Mark Cuban get lucky because he sold Yahoo! stock at the right time? Is Zuckerberg a genius or was he lucky he wasn’t born in 1885? Was Myspace just less lucky?

Like Dalio, Buffett and Munger would certainly attest to how much rigorous mental models drive their success, but can we specifically identify how?

While it’s impossible in most arenas to identify specific causes of success, when you step back and make a study of success, you see some clues.

When I first stepped back from my career in 2000 and began this work, success had seemed simple to me—put your head down and work hard.

This brute force approach served me well in catapulting from my working class roots to Goldman Sachs, but I was seeing the limits to this approach.

When the Internet bubble burst and Goldman began laying off bankers, all of them were working hard, so what made the difference for those who kept their jobs?

Said differently, beyond working hard, what truly matters to success in your career?

Investigating this question over a decade of reading an endless number of books on topics like mindset and goals and effectiveness and planning and skills and whatnot, success became very complicated to me…

But as I kept going deeper into these topics I could see the straight line through.

It is that they have an approach!

That is, they have a method that enables them to do one thing…

A System of Continuous Improvement

One of my favorite stories from my Do What You Want books is on Toyota and the auto industry after the 2008 financial crisis.

It was obvious to everyone that Toyota was years ahead of the gas guzzling American manufacturers, yet it was less obvious that this was the result of a multi-decade focus on institutionalizing Kaizen, the pursuit of continuous improvement.

Think about anything that you have ever gotten good at. It might be lacrosse, riding a bike, playing pool, skiing, dancing, yoga, school, anything.

No matter what the activity, look deeper and you see the same process of continuous improvement.

However you did it, you consistently got better. Whether you had a coach, or you were leading yourself, in the same way Ray Dalio has used his principles, you had a method to continuously improve over time.

As Stephen Covey taught millions of people in his 7 Habits of Highly Successful People, us humans are most effective when we adopt habits of continuous improvement.

Ray Dalio’s principles work for him much the same, as a “device” he uses to continuously improve his process and results. 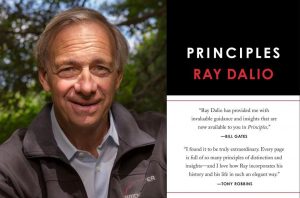 This theme is meta to all success.

The Mundanity of Excellence

In a commonly cited study on success and human excellence I’ve written about before, Dr. Daniel Chambliss spent eighteen months living with Olympic-level swimmers assessing what separated the fast from the fastest.

In The Mundanity of Excellence published in Sociological Theory in 1989, he contends that it’s not those who train longer who are most successful but those who deliberately improve every day.

As the good doctor wrote, “Superlative performance is really a confluence of dozens of small skills or activities…which have been carefully drilled into habit.”

Dalio’s principles can be framed the same, as a way he diligently captures his thinking and drills into habit (and algorithms) the principles that continuously lead to better performance.

Putting It On Rails…

There’s lots of ways that you may drive across the country, and then there’s the train tracks that take you straight where they go…

Similarly, there’s lots of ways that you might drive success, and then there’s putting it on rails.

This means locking it in—getting clear on your path to success and systematically driving it every day.

Often we get stuck not knowing what to do.

Other times we get stuck at what we “should” do, but we’re each our most effective when we’re clear on what we’re doing, and we’re “just” doing it.

In writing down how he was making decisions and developing principles, Ray Dalio took the thinking out of his future decisions, giving himself a simple way to keep making better decisions.

Does That Settle The Question?

While it’s easy to attest that a principles-based approach to continuous improvement is more likely to lead you to success, there are of course many variables that lead to success and failure. (e.g. What is Snapchat’s?)

In the end we have no way of knowing how much Ray’s principles have driven his success, but there’s plenty of evidence that his method of continuous improvement is one that works time and time again.

Charlie Munger has mental models, Ray Dalio has principles, and whether you have rules or procedures or commandments or ideas or whatever, what matters most is that you have a method that enables you to continuously improve.

To be sure there’s much luck to success, but there’s also predictable processes and skills that shift the odds in your favor.

Ray Dalio’s Principles are one of them.