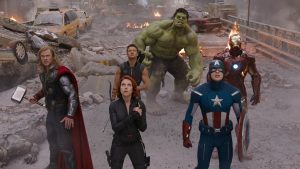 My favorite scene in The Avengers is right near the end.

After Earth’s mightiest heroes have been divided and conquered by the evil deceiver, Loki, they are assembling in Manhattan.

With a grotesque alien army streaming through a hole in the sky they are humanity’s first, last and only stand.

Then, just as the scene is getting even worse, the final Avenger rolls up on a motorcycle.

It’s Bruce Banner, aka The Hulk, looking worse for wear after crashing down into an abandoned factory somewhere.

“So, this all seems horrible,” he says.

You might know that this work began for me in a horrible time back in Silicon Valley.

Bright eyed with the gold rush of technology, I’d landed a plum transfer to Goldman Sachs’ Silicon Valley office right at the top of the market.

By the time I was boots on the ground, however, the first shoe had already dropped.

Those of us in Silicon Valley will always remember March 10, 2000 as the end of the internet bubble, and start of the pop.

But it still wasn’t for another year or so that the other shoe dropped.

The not so great financial crisis in 2008 had the same footprint.

Investing in distressed companies at Carlyle, we were patiently prepared in 2007 when the Bear Stearns first shoe dropped.

But it wasn’t until Lehman Brothers collapsed some 9 months later that the legs cut out.

In both cases, round after round of layoffs later fewer companies and people were left standing.

I was too naive back in 2000 to imagine the internet bubble bursting.

But I well learned my lesson and was well positioned some 7 years later when the credit bubble popped.

Since then we’ve inflated it nonstop, once again seemingly expecting it never to pop.

It’s tragic that we find ourselves in a horrible situation, again.

And especially tragic that horrible decisions have led us here, again.

Yet, how could anyone be surprised?

People keep talking about the horrible state of the global economy like they’re confused how we got here.

What did we expect would happen when we shut down the world for years and destroyed billions of people’s lives?

Divided and conquered people make it political saying how this or that country or the left or right created this.

Everyone with both eyes open clearly sees that we’re all on the same losing team.

It’s funny how many people keep looking to media and leaders to tell them where this is now headed.

If those people had any clue, why would we be here?

In 2008 the Fed never even saw the credit bubble and housing bust that they helped create, let alone learned from it.

The UN has started lamenting the horrible state of the world, like they haven’t been on the job for 80 years.

It’s like “leaders” in Europe who made horrible decisions on energy now pointing fingers why millions of people can’t heat homes and eat.

Just today I saw that economists now predict an 80% chance of recession, like it hasn’t been obvious for years.

Where were they when we were making the disastrous decisions that led us here?

Pretending that you can make a meal of it and not just eat desserts.

Yet, still, no-one can know where it’s headed.

The future is unknowable.

This is why you can enjoy being color blind as I wrote about here.

The less you think about what you can’t know, the less you introduce uncertainty into your brain, and the more you focus on the things that you do know.

What you do know is that you can waste tons of time getting pulled into thinking about those unknowables that you can never influence.

What happens from here?

Does it get worse?

Or even QUICKLY get better?

But you can know one thing.

That’s really the reason I stepped back from my career in 2000.

In my short career we’d already been through a Russian debt and Asian financial crisis, so I quickly learned that these things are never anomalies.

Yet looking at the many top people from top schools being laid off around me, I could see that reality hadn’t sunk in, yet.

Before this many of us naively believed that the bubble would keep inflating, or if it popped, that companies would “take care” of employees.

A hard lesson many have learned through these cycles is that it’s all on you.

And only you can prepare.

I’ve seen those who were prepared and got laid off quickly started new jobs.

Others remained unemployed for years.

Threat can be seen everywhere, and so too can opportunity.

And keep in mind, things can always be better and worse.

As insane as this phase is, 100 years ago our species was going through an even worse time.

The murderous monarchs had just marched us through our first world war.

Humanity had been ravaged by a pandemic that killed some 50 million people, including many young and healthy.

And keep in mind that all this was happening before most people had electricity.

Then our ancestors had some good ole roaring twenties before we collapsed into the not so great depression that lasted from 1929 to 1939 before we were marched into World War II.

Back then all this must have seemed devastatingly horrible, except for looking back and seeing worse.

See, for as harsh as these times were, in many ways they were the best of times too.

American industry had exploded taking our great nation and soon the world from darkness to kerosene to electricity.

US steel fueled by Edison and Tesla’s electricity fed these giant industries and built thriving cities with great monuments piercing the sky.

These greatest human innovations and American industry ultimately ended the depression and world war too.

So you can see that even in the worse times it can always be worse.

All those things going on out there affect your life and the lives of billions.

But there is little that you can influence, let alone control.

I stopped writing and repeating this message because it’s the same lesson for me too.

All you ever control is you.

What you think and do.

And ultimately, in better and worse times, thinking your best and doing your best is the best you can ever do.

No matter how horrible a situation looks that’s what The Avengers do.

They stand together, and even in the face of a grotesque alien force, come out victorious too.