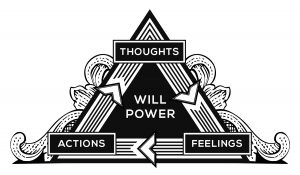 When you work on Wall Street you have the same conversations over again.

Just like the brain has some 70,000 automatic thoughts a day, 70-90% that are negative and redundant, most conversations are too.

“Where do you think the economy is headed?”

That’s a question you can get pulled into all day every day.

One person shares their opinion.

The future is 100% unknowable.

We all know this, of course.

None of us have a crystal ball, and all that.

But because of the way our brains are set up and how you are socially conditioned, all day every day you can be “thinking” about the future.

This can be extremely valuable.

A magical thing about being human is the prefrontal cortex that gives your brain the unique ability to strategize, rationalize, plan ahead.

There is limitless value in this.

It is probabilistic thinking, preparing for different scenarios.

This is different to kidding yourself that you have any certainty whatsoever.

In the early days on Wall Street I didn’t get it.

So I’d get dragged into these conversations all the time.

Oh, what do you think will happen in the markets?

If you’re talking to the right people it all sounds so thoughtful and rational.

Just like all those stock market analysts with their smart sounding stories about tech stocks, before it all came crashing down.

Here’s an article on the dismal accuracy of this year’s GUESSES.

Over time if you’re paying attention you see it’s not just that all those talking heads with such great certainty about the future turn out to be wrong.

The terrifying part is that after they’re wrong they keep “rolling the narrative,” claiming they are once again right.

This means that they can be perpetually wrong while maintaining credibility of being right.

It’s like after the credit bubble burst in 2008, the VAST majority of economists who had ZERO CLUE that there was even a bubble, including the Federal Reserve, now started talking about where it was headed.

At Carlyle, investing in distressed companies through this crisis, we paid ZERO attention to their guesses.

That’s the narrative these days, lots of depression talking our way into recession.

Truth is, and many of you see this, if you’re getting your intel direct from source you know the economy is flashing red.

We may be headed down.

Tends to pop or deflate down.

Should this shock anyone?

After all the fake money that we’ve printed to prop up the fake economy, let alone after shutting down the world for years?

Running around squawking our way into even more woes.

Is this how it’s meant to be?

Much of what goes on in our world is fear.

When you REALLY get how us humans are functioning internally, you see why.

That inner voice, and much of the pictures and feelings that we become consciously aware of are driven by the fear construct.

The internal mechanisms and negativity bias fear for survival.

Media and social programming reinforce this, mostly keeping our species in freeze, fight or flight.

This means that many people’s brains are filled with fear.

And many of us as much as we try struggle to stop fear taking hold.

One way we seek to pacify fear is to look to the future hoping for a bailout.

Doing this we’re “trying” to rid ourselves of uncertainty and develop the certainty it’ll all be OK.

This leaves you with 0% certainty.

There is one thing you can be certain on.

You make you OK.

If you know you can take care of anything that comes your way, what’s left to fear?

You can know this with 100% certainty.

Also with 100% certainty you know that you lack a crystal ball.

I’ve studied remote viewing with this psychic spy and have had many experiences of “seeing” the future.

But one thing I am 100% certain of is that it’s a waste of time to CONSCIOUSLY ruminate on.

For sure, 100%, you want to be thinking ahead, planning, strategizing, preparing for anything, especially now, and especially what you want.

But this is WAY different to allowing that brain to incessantly cycle thoughts on the future “seeking” certainty.

Ironically, we think of ourselves as logical and rational beings, but neuroscience tells you that we are the OPPOSITE.

Of course we get that we have 0% information on the future.

Yet we have 100% ability to rationalize wasting countless hours simulating future fear.

Your biology is hardwired for fear.

You live in a world that predates on this; filling you with uncertainty, triggering fear.

But you can still choose to be rational about these things.

And see that there is only one thing that you can 100% know with certainty.

The ONLY thing that you can know about the future is who you are choosing to be.

And not in the future.

Your only power is now.

The only time you can ever think, feel, take action is now.

Every thing that will EVER happen in EVERY future will be happening in the now.

And the only thing you can know with 100% certainty is how you’re experiencing now.

People can so easily get caught up wasting hours a day thinking about unknowable things that feel bad.

Or we can see that no matter where this is headed, you can choose your most magical journey.

You see at the top of this page one of my favorite devices.

It’s one of my favorites because it took me about 12 years to discover, and made life so much easier for me.

Before this I’d poured through thousands of self-help books and heard all the usual stuff on thinking.

You are not your thoughts.

You choose your thinking.

There’s an awakening of consciousness.

But when I got this magical triangle into my head it all became so obvious.

I found it in an esoteric book on the secret science, mind and reality constructing.

But too it maps to the same concept in cognitive, behavioral psychology.

Your thoughts lead to feelings and feelings lead to actions.

You can start at any point on the triangle.

And see around and around this merry go round us humans go.

The magical triangle shows that your best thoughts drive your best feelings and your best actions.

And also every other way around.

This is why I’ve cut out media.

And why I never engage with people on unknowable topics or opinions, or anything redundant or negative, or frankly anything that doesn’t relate to doing your best living your best life, isn’t because it’s a complete waste of time.

I’ve GOT to keep it out of my mind.

The ONLY path I want to be walking with people is living your best life now, creating your best future, and doing our best for humanity.

Wherever this economy and world is headed, it is headed here.

Our “leaders” have PROVEN that you can never expect them to pave a happy, smooth, functional, equal, inclusive, sane road for humanity.

You can do your tiny part to influence the course.

But the world is the bus, and no matter the journey or destination, only you choose to enjoy the ride.

Today when people ask me where I think this is headed I suggest that you stay in your best mind and actions.

With the terribly destructive choices that we’ve made none of us should be shocked with the disastrous state of the economy, world and human brains.

Perhaps we had no better choices, but we still must lay in a bed that we woefully unmade.

Even then, no matter where this is headed, into the worst, or who knows, the absolute best times, only you get to choose.

One can be scared of the future.

Or you can choose your best thoughts, feelings, actions.

No matter where this bus is headed, this is your magical ticket to ride.